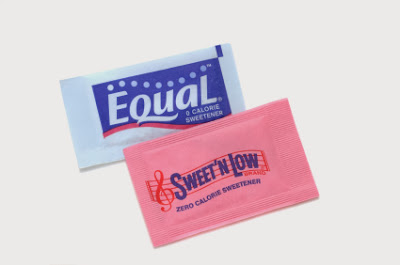 What these advertisements fail to mention are the hidden dangers—the health risks involved. Like any important decision, you must weigh the “benefits” with the costs. You may reconsider their purchase after considering the bittersweet truth about artificial sweeteners. Find out why EnergyFirst avoids using these harmful artificial ingredients in our products. Far from being sweet as sugar, artificial sweeteners carry their own health risks.

Culinary Chemicals?
Does tasting the same sweetness of regular soda with zero calories sound too good to be true? Well, after a closer look at the artificial sweeteners commonly used in diet sodas, you may start to believe so. Here just a few of the sweeteners you may come across:

Aspartame is a non-caloric sweetener that combines two amino acids and methanol. This sweetener, which is 220 times sweeter than sugar, is poorly tested. However, what do the few studies we have reveal? A popular study done in the ‘70’s on aspartame found that it caused brain tumors in rats. Why is it still approved? The USDA convinced an agency that reviewed this study to change its conclusion.

In 2005, scientists re-examined the health effects of aspartame and found that it caused kidney tumors, lymphomas, and leukemia in rat studies. A follow-up of that same study found the same diseases in rats plus breast cancer. It is interesting to note that many of these diseases are rare in rats. Recently, a study done on mice found that aspartame led to lung and liver cancer.

Other reported symptoms from aspartame use include hallucinations, dizziness, memory problems, and other neurological problems.

Is it worth the risk? According to the Center for Science in the Public Interest (CSPI), aspartame is unsafe, poorly tested, and not worth any risk. The research is clear. The fact that companies and government agencies are ignoring the research does not mean you should, too.

Therefore, if you plan to buy cereals, frozen desserts, fruit spreads, yogurts, drinks, or any other packaged foods, double check the ingredients list for this harmful cancer-causing ingredient often sold under the brand name Equal and NutraSweet.

Acesulfame-potassium (or Acesulfame K) is another artificial sweetener that poses a cancer risk. Also about 200 times sweeter than sugar, this sweetener is often sold under the brand name Sunette. According to the CSPI, this sweetener needs to be tested by better quality studies, especially long-term studies.

Cyclamate: For years, this artificial sweetener was used in diet foods until the government finally decided to ban it in 1970 due to its cancer-causing dangers.

Saccharin: Meet another cancer-causing artificial sweetener. Like the previously mentioned ones, this one also has limited research to back up its so-called safety. 300 times sweeter than sugar, saccharin is often sold under the sweetener packet brand name Sweet ‘N Low.

A study led by the National Cancer Institute found that saccharin is linked to bladder cancer. Other studies show saccharin’s potential of causing many other cancers—uterine, ovarian, skin, and other organs.

Interestingly, this sweetener was approved by the government despite these clear animal studies and despite the FDA’s desire to ban it. The only thing companies were required to do is place a warning sign on foods with saccharin regarding their cancer-causing potential. How did companies who use artificial sweeteners respond? They urged the governments to take saccharin off their lists of cancer-causing chemicals. In essence, they urged governments to hide this important information. By 2000, their wish was granted and more. Congress agreed that the warning label would no longer be necessary.

Be on the lookout for Brazzein. Although it is marketed as a natural sweetener, it has not been tested for safety.

Neotame has a chemical formula similar to that of Aspartame but is 8,000 times sweeter than sugar. The only difference between Neotame and Aspartame is 3,3-Dimethylbutyraldehyde , a chemical that is known to irritate the skin, eyes, and respiratory system. Both Aspartame and Neotame metabolize to formaldehyde, a toxin and human carcinogen.

Are artificial sweeteners the secret to weight loss? Although they generally have low or no calories, they are not a natural, safe, or sustained way to lose weight. Lose weight or stay healthy the safe way. A healthy, balanced diet packed with nutrients and a regular, efficient exercise program will give you real, natural, and sustained energy. No chemically-processed man-made ingredient will ever compare.